VANCOUVER — With 22 years of extensive culinary experience in some of the most renowned kitchens in the world, Chef Kamal Silva b

rings a diverse blend of multicultural flavours to his new role as executive chef at The Westin Bayshore, Vancouver.

Silva’s experience at five-star hotels, most recently as director of food and beverage at the Shangri-La’s Rasa Sentosa Resort & Spa in Singapore, has set him up perfectly for his new role, overseeing The Westin Bayshore’s restaurants and lounges – including its brand new H2 Rotisserie & Bar – as well as in-room dining and catering for the 70,000 sq.ft. conference centre. 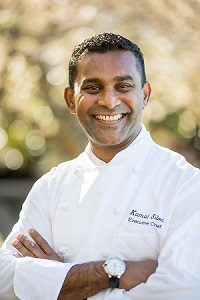 “Vancouver has long been a favourite city of mine, and I’m delighted to be working here at this particular hotel, with its extraordinary location and stellar reputation,” says Silva.

“My family and I are looking forward to exploring the local farmers’ markets and ethnic grocery stores. I have plenty of ideas gleaned from my travels that will likely sneak onto the Westin’s menus.”

Silva considers himself to be a passionate and artistic team player. Born in Sri Lanka and trained at the Asia Lanka Vacation Education Centre, Silva’s career has taken him not just to Singapore, but to Saudi Arabia, Alberta and BC, in roles with: the Fairmont Dubai, UAE; Le Meridien Hotel, UAE; Inter-Continental Hotel, Al Bustan Palace, Oman; the Fairmont Jasper Park Lodge; the Fairmont Chateau Whistler; the Fairmont Vancouver Airport; and, the Fairmont Empress in Victoria, BC.

In addition to Silva’s ability to manage food and beverage operations with sales worth more than $30 million annually, his skills have won him many awards.

While in Dubai, Time Out Dubai awarded the restaurant of which he was head chef, the Best Global Restaurant Award in 2006/2007. He became a member of the Chaîne des Rôtisseurs in 1996 in Bahrain, was awarded Employee of the Year by Le Meridien Hotel in Dubai in 1997, and, between 1993 and 2001, led teams that won numerous gold, silver and bronze medals at the Emirate Salon Culinary competition and the Salon Culinary Food Exhibition of the Middle East.

“Kamal’s standards of excellence and attention to detail are just what we were looking for in an executive chef for The Westin Bayshore,” says the hotel’s general manager, Martin L. Leclerc. “We’re extremely pleased that he decided to make the move from Singapore to Vancouver and work with our team.”

More authenticity will be part of COVID legacy

ABOUT US
We pride ourselves on providing essential news for the hospitality industry. Whether providing event coverage or comprehensive reporting, the Canadian Lodging News editorial team engages with all aspects of the industry. From coast to coast, the company gives readers the information they need to help them succeed.
Contact us: cisherwood@canadianlodgingnews.com.
FOLLOW US
© Canadian Lodging News 2019
MORE STORIES